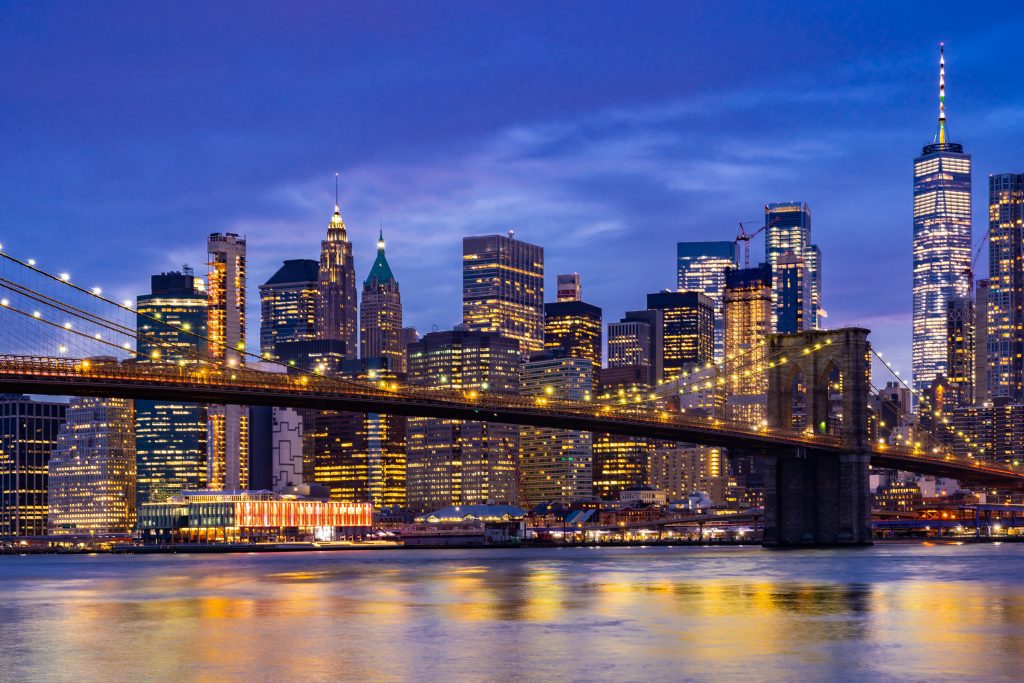 New York, New York. The Big Apple is located on the East Coast of the US. New York City is made up of five boroughs that sit along the Hudson River. Manhattan Island is at the heart of New York. It’s considered one of the most commercial, financial and cultural centres of the world. Iconic for movie lovers and travellers, the iconic skyline is abuzz with skyscrapers of dizzying heights, world-renowned monuments and famous Broadway musicals located in neon-lit Times Square. New York has its own history and culture, unlike anywhere on the planet.

Private Charter Flights with Admiral Jet can have you in New York in around 7 hours – could be less if you have a fast jet, the right route and the weather on your side. There are several airports that you can fly into, each one explicitly catering a high-calibre clientele that deserves to be treated with incredible service and efficiency.

JFK airport has a private jet terminal that operates 24 hours a day. Your drive would be less than 45 minutes to the heart of New York’s Financial District. Feeling a little opulent and want to get there sooner? Book a private charter helicopter and be there in 10 minutes instead.

What To Do In New York

New York is one of those destinations that just, has it all. From rich culture and heritage, fine dining to street food, impressive architecture and monuments, to incredible nature and wildlife (Central Park).

Did you know: Pearl Street gets its name because oyster shells were used to pave it?

The former capital city of the United States has a long history of welcoming immigrants to the country. More than 800 languages are spoken in NYC, making it the most diverse city in the world. The city is home to more Chinese people outside of Asia and more Jewish people outside of Israel.

The Statue of Liberty has welcomed immigrants to the country since 1886 when France gifted the statue as part of a celebration. The Statue of Liberty arrived in 214 crates and took four months to build. New York is also home to the third-largest library in the world. The New York Public Library houses a whopping 50 million books.

Shop Until You Drop

Take A Stroll Through Central Park

In the centre of Manhattan is the aptly named Central Park. It is a stunning piece of nature in an otherwise concrete jungle. Larger than the entire country of Monaco, Central Park is famous for its beauty and receives 42 million visitors a year. It is also considered romantic all year round. Nothing beats a horse and carriage ride around Manhattan’s stunning greenspace.

Eating Out, From Fine Dining To Street Food

New York has over 26,000 places for you to eat. The country has so many nationalities that you would be hard-pressed not to find something you’ll love! There is something for everyone and every budget. New York is Foodie heaven. The first pizzeria in the US comes from New York, no matter your diet, be sure you don’t miss out on this old favourite.

New York is a big place, to fully appreciate it, take a few days to see the sites, go shopping and discover your favourite restaurant. If theatre is your thing, be sure to visit Time Square and soak in all of the dramatic atmospheres with live performances on Broadway. Spend at least 3 days (minimum) to see all the boroughs and districts of this fantastic city.

Adjust Your Clock For Mealtimes

Dinnertime for New Yorkers is between 8pm and 10pm, you’ll be hard pushed to get into any restaurant at those times. Either plan ahead and make reservations as early as you can or be prepared to eat your dinner either earlier, or later than usual.

The City That Never Sleeps

Every night of the week, there are live music performances at Forest Hill Stadium, Beacon Theatre, or Madison Square Garden. Drink in the atmosphere with plenty of live performances that will stay with you forever.